PROCEDURE: Soak the suitable material (wheat, groundnut or rice). Grind them separately & make their paste. Similarly make a paste of potato, fruits & egg album in separately. Filter the content of all these in separate test tubes & label them. Use these filtrates for testing.

Study Of Character Of Plant Specimens And Identification With Reasons 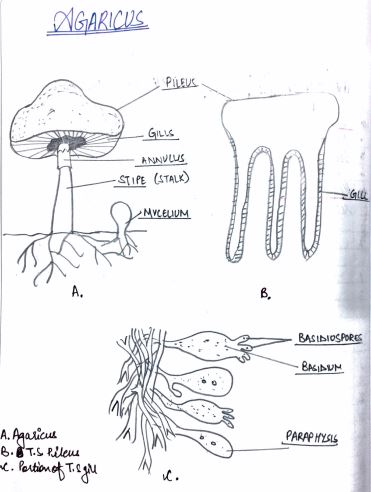 COMMENTS: It is a saprophytic fungus that grows in hum & rich soils piles of straw & rotting wooden logs

Gills are present on the lower side of the pileus 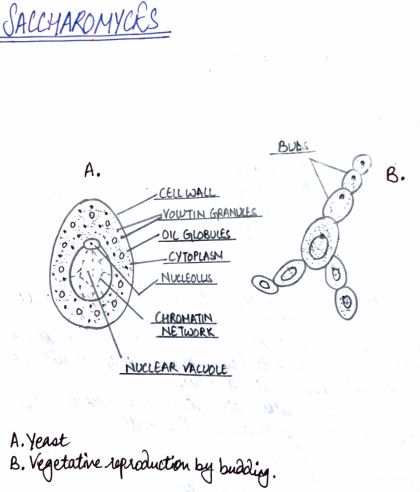 It is unicellular but may form a ‘pseudomycelium’ by repeated budding 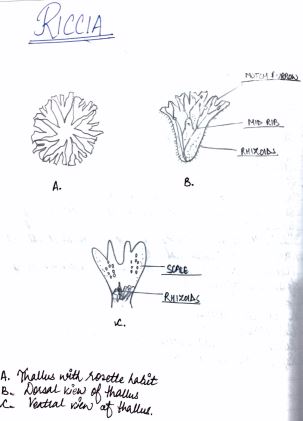 COMMENTS: The plant body is a dorsoventrally flattered & dichotomously branched thallus. It may form a rosette due to repeated dichotomous branching of thallus

Scales and rhizoids are present on the ventral surface. Scales protect the growing apex and retain moisture

Rhizoids are unicelluclar, colourless and tabular. They help in anchorage & absorption 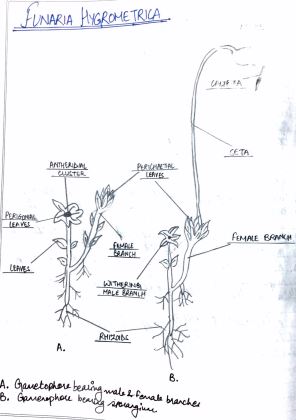 COMMENTS: The plant body is gametophyte. It is green, erect & is differentiated into rhizoids, axis (stem) & leaves

Rhizoids are multicellular and branched with oblique septa

The main axis is erect and bears spirally arranged lenses

Sporophyte is a partial parasite upon the gametophyte 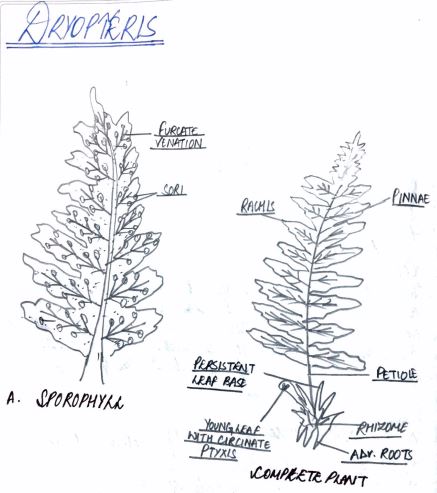 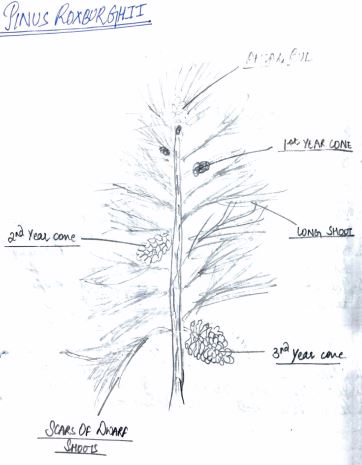 The plant body is sporophyte. Differentiated into root, stem & leaves. 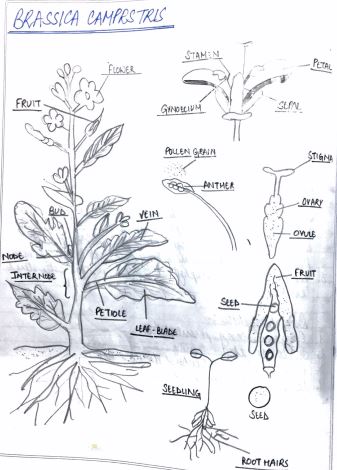 It bears colour yellow flower for reproduction. Each flower is bisexual & bimerous with cruciform corolla

Seeds are enclosed in fruits 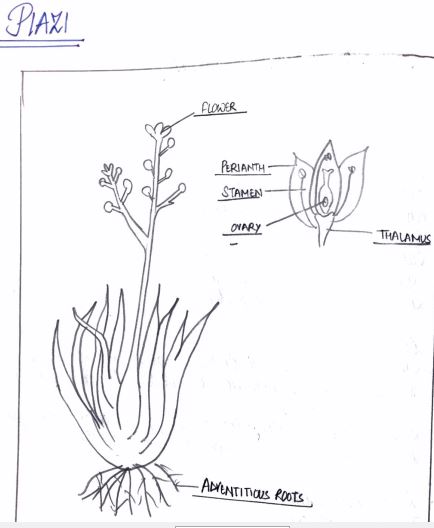 Leaves are bone in cluster. Each leaf is cylindrical, hollow &has parallel variation

The seed enclosed an embryo with only one cotyledon

Embryo with one cotyledon

The thallus of lichen resembles neither alga nor fungus

Study Of Characters Of Animal Specimens And Identification With Reasons

It is unicellular, microscope, grayish in colour and is about 0.2 to 0.5 mm in diameter.

Under the microscope, a living Amoeba appears like an irregular jelly like, tiny mass of hyaline protoplasm. The protoplasm can be distinguished into an outer octoplasm & inner endoplasm. 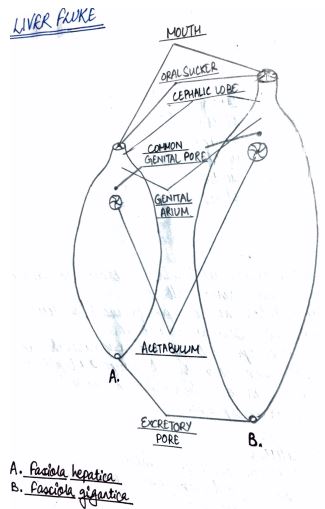 COMMENTS: It is an endoparasite found in the bile ducts of sheeps, goats, cattles, sometimes other vertebrates excluding man.

It is somewhat triangular, flat, leaf like parasite about 25mm in length. It has an oval and ventral sucker (acetabullum) used to adhere to the bile duct.

The body is covered by cuticle with spinules.

Body is covered with cuticle 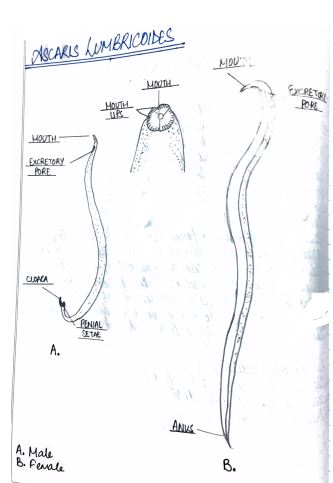 COMMENTS: It’s a common intestinal parasite of a man especially children. Occasionally it may occur in the intestine of pig, sheep, cattle etc.

It has a cylindrical body with tapering ends. The front ends of the body have a terminal triradiate mouth surrounded by three lips.

A little behind anterior end, there is a small excretory pore. 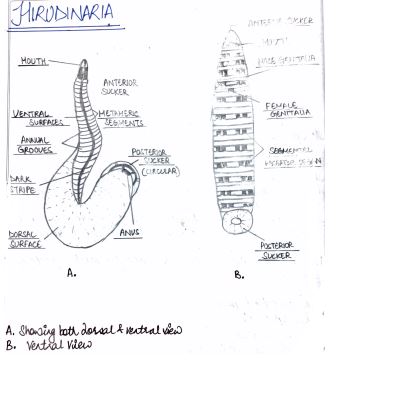 COMMENTS: It’s found in ponds, lakes, rivers, swamps and in moist soil near them

It’s a facuttative ectoparsite of cattle and other mammals. It sucks blood (saguinious) by periodically coming in contact with the host body.

Its body is somewhat dorso- vertically flattered and measures about 15 cm in length but it can stretch its length upto 30 cm when required. It is olive green in colour. 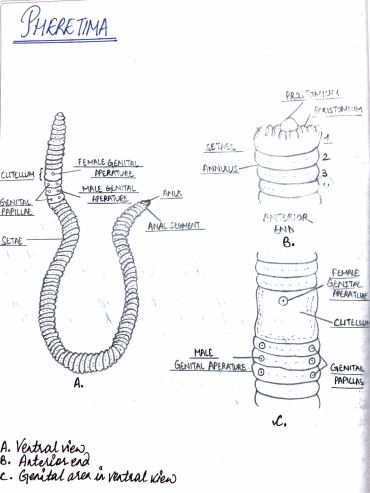 COMMENTS: The segments 14th, 15th & 16th form a band called clitellum. It focuses one or more egg cases or cocoons in which ova are laid & fertilized.

Mouth is present at the anterior end. A fleshy lobe called prostomium dorsally over hangs upon the mouth like a hood. Anus is preset in the last segment.

Each segment except the first & the last bears row of minute yellowish setae for locomotion.

Earthworm has setal for locomotion,

COMMENTS : The body is curved & is almost 5 to 18 cm long. It is distinguished into cephalothorax & a long abtomer. The cephalothorox is dorsally covered by a hard carapa which extends as a serrated process called rostrum. Cephalothorax bears eight pairs of segmented legs & on a pair each anterrae, anterrrules & stalked compound eyes.

Cephalothorax is covered by a carapace with serrated rostrum. 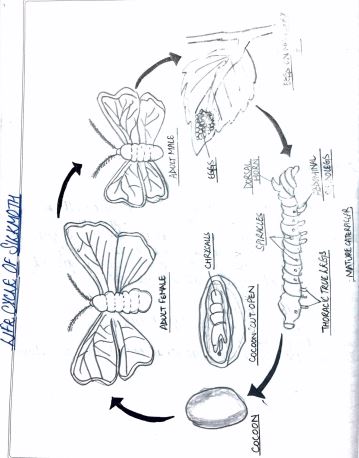 COMMENTS:Adult silk moth is about 25cm long with two pair of wings. It is creamy white in colour

The body is divisible into head, thorax & abdomen & is covered by minute scales.

The larva undergoes four months & then stop feeding. It secretes a sticky fluid through its spinnerets, which on coming in contact with air becomes silk thread & remains wrapped around its body to form pupa

Presence of two pairs of wings & three pairs of legs

Adult silk moth is about 2.5 cm long with two pairs of wings. It is creamy white in colour.

The body is divisible into head, thorax & abdomen & is covered by minute scales

The larva undergoes four months & then stop feeding. It secretes a sticky fluid through its spinnerets, which on coming in contact with air becomes silk thread & remains wrapped around its body to form pupa

Presence of two pairs of wings & three pairs of legs 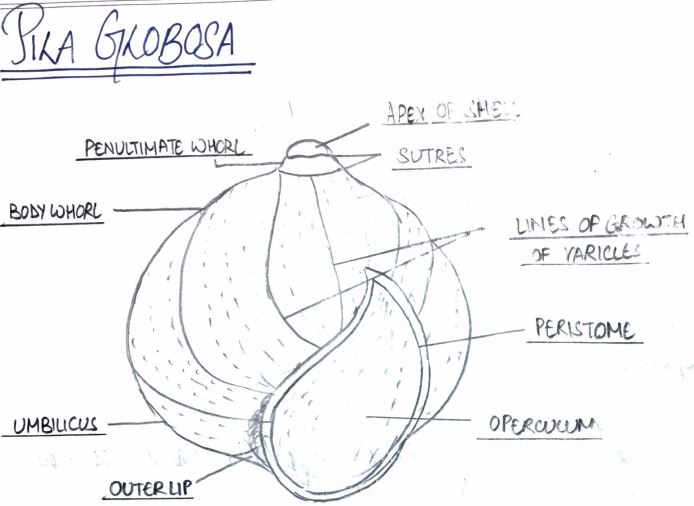 COMMENTS: It has a soft & slimy body enclosed in a coiled calcareous shell. The opening of the shell is closed by a thick plate like operculum.

The body is differentiated into head, foot, visceral mass & mantle

Foot is muscular & board 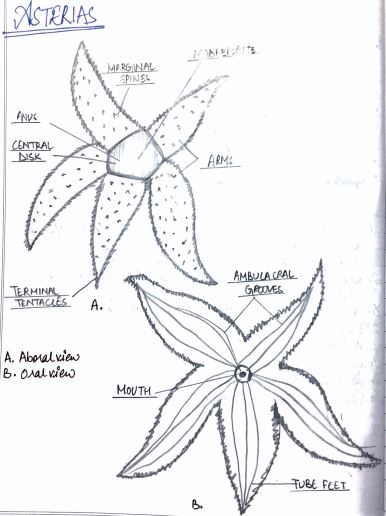 Sexes are separate without sexual dimorphism

Aboral surface bears large number of short & movable spines. Anus is present in the centre of the disc.

Each arm with four rows of tube feet

Oral & aboral surfaces are quite distinct 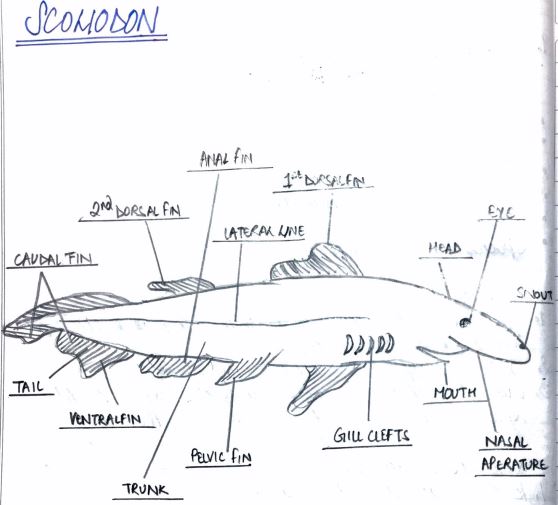 Sexes are separate. Sharks are viviparous

Mouth is sub- terminal & ventral. A pair each of nostrils & large lateral eyes without eyelids

There are five gills slits covered by operculars

It measures 80-90cm in length. It is covered with overlapping cycloid scales. 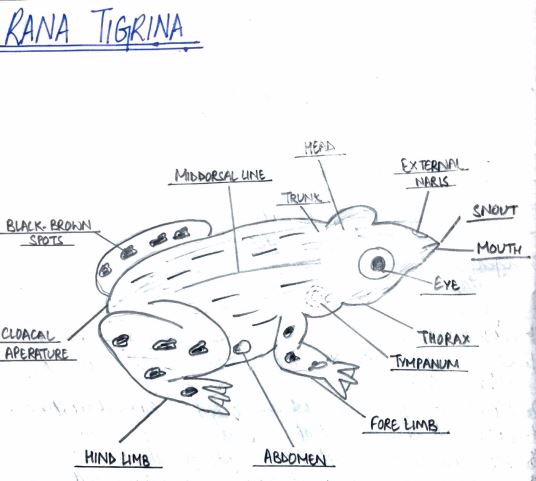 The skin is dark green with black patches, moist & is covered by mucus.

Eyes bulging out without eyelid. Underwater, eyes are protected by their membrane called nictitating membrane.

Sexes are separate. Development is indirect 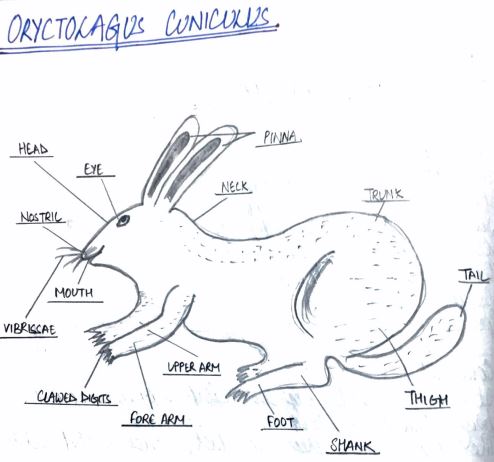 COMMENTS: It’s a body is divided into head, neck & trunk & small bushy tail. The body is covered with hair of white brown or black colour

Two largely movable pinnae present behind eyes. The eyes are pink in colour

The mouth is bounded by soft & fleshy upper & lower lips

Sexes are separate with sexual dimorphism

Females have mammary glands with nipples in the abdomen 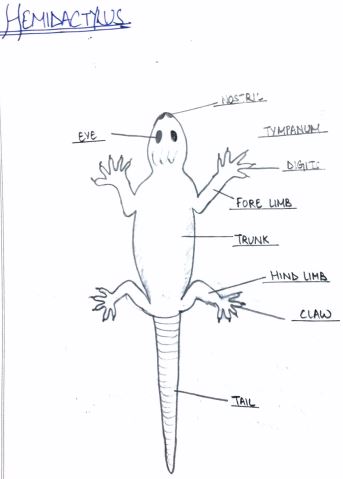 The head has pairs of eyes with movable eyelids, nostrils, & ear opening.

The skin is dry, covered with minute scales. The tail with annular pores of scales, which can be scales that can be broken off.

Limbs four in number, each with five clawed digits 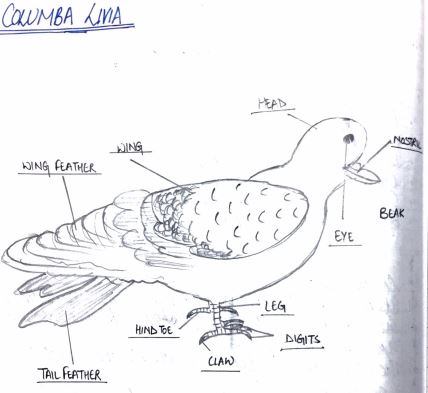 COMMENTS: Its body is 20 to 25 cm long & covered with slate blue feathers

The eyes are red in colour.

The beak is small & slightly curved in front 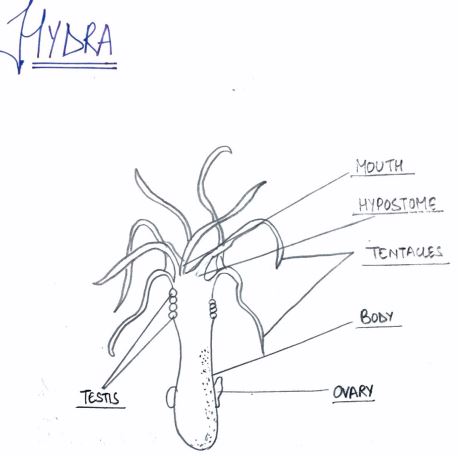 COMMENTS: The body consists of an elongated tube with closed base & single opening at oral end.

Aim: Study and discuss the given flowering plants and give its floral formula 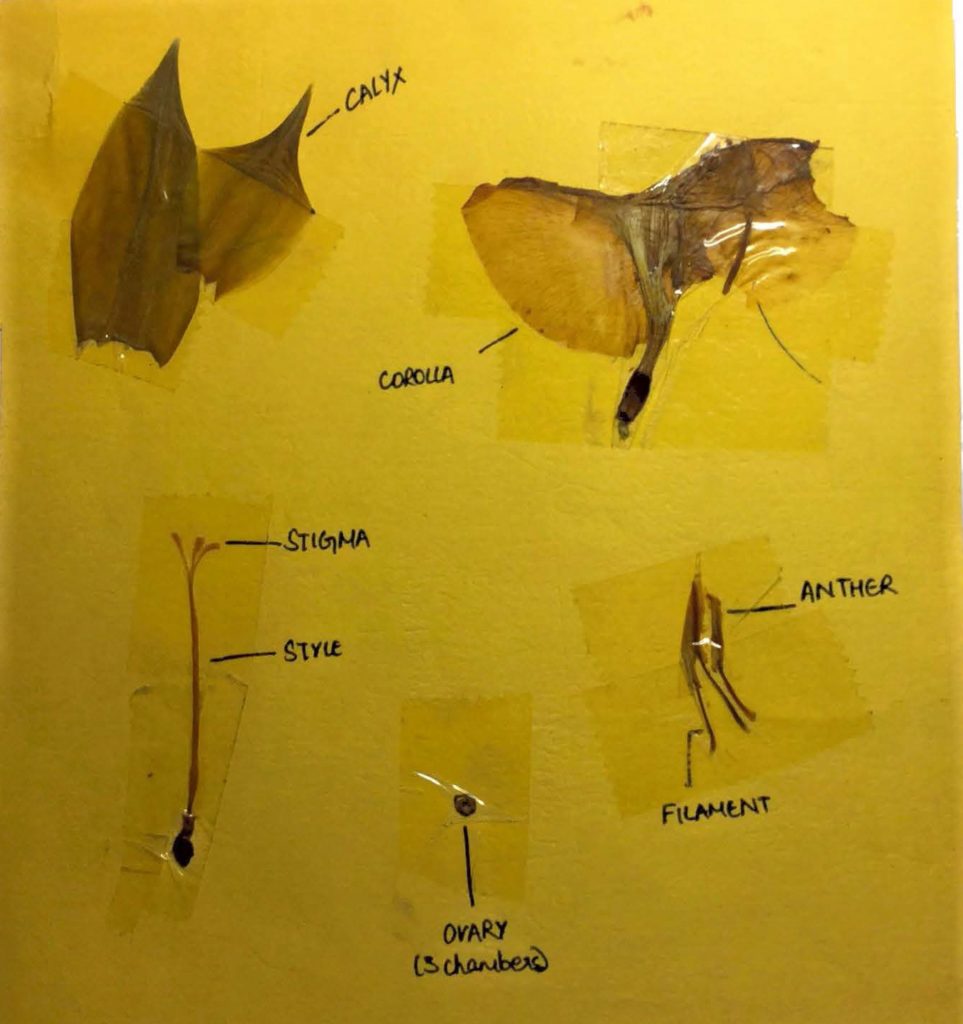 AIM: To demonstrate plasmolysis and de-plasmolysis in peels of Rhoeo leaf in hypertonic and hypotonic solution using sodium chloride.

THEORY: When a plant cell is placed in a concentrated salt solution, water from the cell sap flows out due to exosmosis.

When a plasmolyzed cell is placed in water or hypertonic solution it absorbs water due to endosmosis and its protoplasm assumes the original shape it is called de-plasmolysis.

Plasmolysis is, this can be defined as the shrinkage of the protoplast of a cell from its cell wall due to exosmosis in a hypertonic solution.

OBSERVATION: the cell in dilute solution appears turgid due to endosmosis while the cells in concentrated shows plasmolysis due to exosmosis.

When the concentrated solution is replaced with water the protoplast of cells require its original shape,

PRECAUTIONS: The peel should not be exposed or dried.
The slide should be kept dry by removing extra solution with the filter paper. 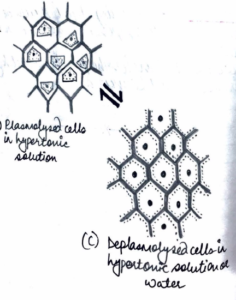 AIM: To study the distribution of stomata on the dorsal and ventral side of a monocot leaf and to calculate the stomata index.

THEORY: Stomato are microscopic pores present in the epidermis of leaves and young shoots of plants.

They are chiefly concerned with the exchange of gases during photosynthesis and respiration.

They are also responsible for the loss of water during transpiration.

Each stomato has a slit like opening called stomata pore, which is surrounded by 2 spherical kidney shaped indirect leaves and dumbbell shaped in monocot leaves cells called guard cells.

PROCEDURE: Take a monocot leaf and from the dorsal surface of the leaf carefully peel out the epidermis of the leaf.

Carefully put it on the glass slide and add 2 to 3 drops of methylene blue so that the stomata could be identified.

Add a few drops of water to remove the excess colour and carefully put a cover slip at an angle of 45 degrees to avoid air bubbles.

Now observe the slide under the microscope and repeat the procedure for the ventral side as well.

PRECAUTIONS: The cutting of peel should be avoided.

Always use filter paper to remove the excess of methylene blue.

Use the brush to transfer the pills from water glass to the slide.

Air bubbles must be avoided.

The website contains the following practicals at the moment:-