Aim : To convert the given galvanometer into a voltmeter of desired range and to verify the same .

Where V is the range of conversion .

As the difference in actual and measured value of potential difference is very small , the conversion is perfect .

1. Length of the shunt wire should be neither too short nor too long .

2. The voltmeter used for verification should preferable be of the same range as the range of conversion .

3. Value of required series resistance should be calculated accordingly .

The connection may be loose .

The emf of the cell or battery may be variable . 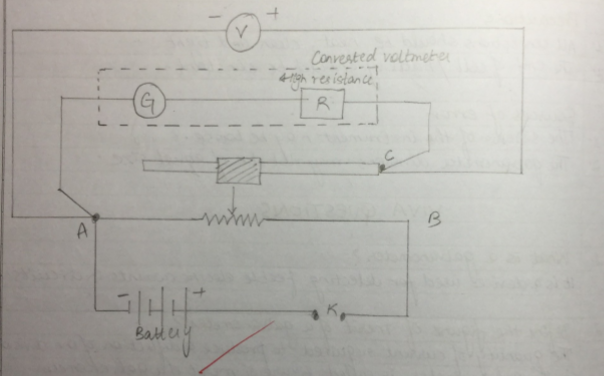 Resistance of given galvanometer (G) 60 ohm

Resistance to be placed in series = Rs

Why is a Galvanometer not suitable to work as an ammeter .

A galvanometer has more resistance and less current . carrying capacity from those required in ammeter . It will damage if large current flows through it .

What is a shunt ?

A small resistance connected in parallel with a galvanometer is called shunt .

Why is a galvanometer not suitable to work as voltmeter ?

A galvanometer has less resistance and more current carrying capacity from those required by a voltmeter .

How is a galvanometer converted into a voltmeter ?

A galvanometer is converted into a voltmeter by connecting a high resistance in series with the galvanometer coil.

What happens when a voltmeter is converted in series in a circuit ?

The voltmeter cannot measure the potential difference in the circuit because overall resistance of circuit increases .