Apparatus : potentiometer , a leclanche cell , a daniel cell , an ammeter , a voltmeter , a galvanometer , a battery , (battery eleminator), a rheostat , of low resistance , a resistance box , a one way key , a two way key , a jockey , a set square , connecting wire , a piece of sand paper .

Where E1 and E2 are the emf of two given cells . 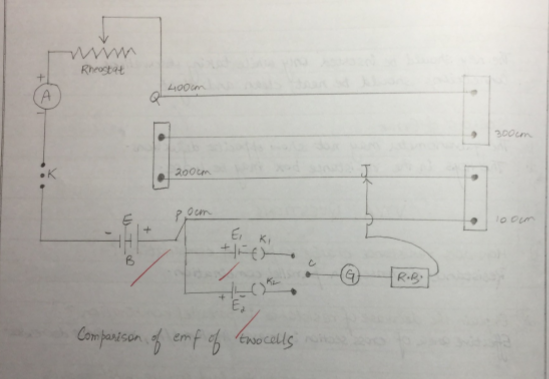 What is emf of a cell?

Electromotive force of a cell is the potential difference across the terminals of the cells when it is in open circuit i.e. no current is drawn from the circuit .

An instrument to measure potentiometer difference or emf of a cell .

What is the principle of potentiometer ?

For a constant current , fall of potentiometer along a uniform wire is directly proportional to its length .

What is preferred for making potentiometer wire ?

Magnum , due to its low temperature coefficient of resistance and high resistivity .

What will you conclude if the deflection of the galvanometer is in the same direction ?

The positive terminals aren’t connected at one point

Potential difference between wires ends is less than emf of cells to be measured .

Emf of driving cells is less than that of cells to be measured .